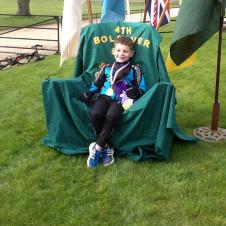 Check out the route he took on Strava,Ethan's Charity Ride. https://www.strava.com/routes/3630282

Ethan's efforts are to raise money to put towards the proposed new scout hut for all of the 4th Bolsover Scouts/Cubs/Beavers and community.

This will be an amazing achievement for Ethan to raise much needed funds and in raising the profile and awareness of our Scout Group in the community.

Cllr Cooper said "Ethan completed his sponsored bike ride and did it quicker than expected. He was totally shattered at the end and speechless. Well done Ethan"

It's not too late to contribute towards the fundraising

Just follow the link below to make a donation